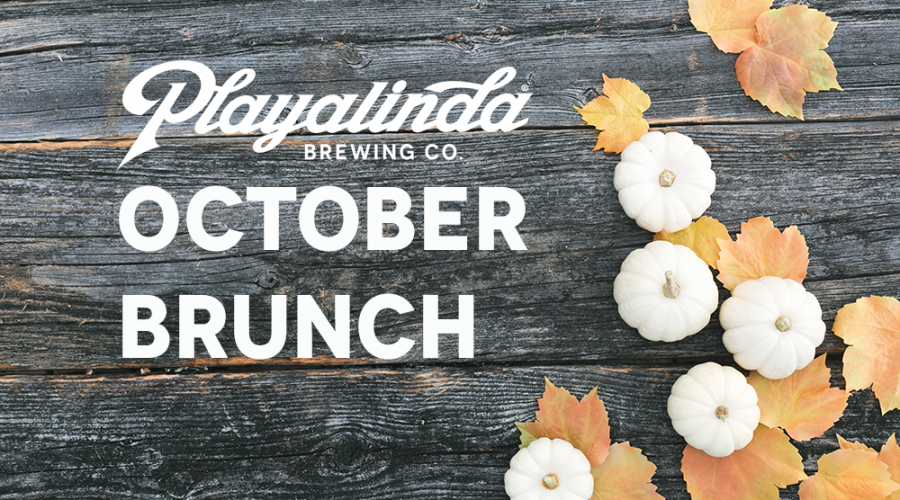 October 2, 2017 By laura in Playalinda Brewing Company Comments Off on October Brunch Additions

Join us every Sunday from 10am – 1pm and enjoy classic favorites such as Steak and Eggs, Fresh House Beignets or Chicken and Waffles, but we also like to switch things up a bit and feature new, seasonal and fresh items every month.

Here is what we have in store for you for the month of October: Keep them all to yourself or share with a friend. Chorizo, onion, peppers, scrambled egg, chilies, cheddar and provolone, salsa, refried beans, and cilantro Straight from the South! Spicy cheesy grits topped with a myriad of sautéed vegetables and creole seasoned crawfish You asked and we answered, streusel is back with a seasonal twist. House made blackberry compote topped with fresh streusel and whipped chantilly. Brix Project’s one year anniversary celebration is coming up this Saturday and we couldn’t be more excited! As we get closer we’ve finalized all the incredible menus that will be rolled out for the party. Take a peek!

August 29, 2017 By laura in Playalinda Brewing Company Comments Off on New Lunch Hours and Menu at Brix Project!

We are now open at 11:30 AM for lunch on Thursdays! To kick off our new hours we are rolling out a new lunch menu, which includes four new and exciting items:

A sweet and spicy curry with veggies and jumbo prawns served over rice noodles. Not your Average BLT Join us as we celebrate one year at Brix Project on Saturday, September 16th!

This past year has been incredible and wouldn’t have been possible without the support of our fans, the Space Coast and Central Florida community and of course our customers! We would be thrilled if you would join us in this epic celebration!

Brix Project will be opening it’s doors for the event at 11:30 AM and will hoppin’ till midnight. We will be serving up a special Chef Select Menu with handpicked items, live music from Jason Domulot from 12 – 4 pm, as well as Josh Whitaker from 3 – 7 pm. There will be plenty outdoor space, so feel free to bring a folding chair. We will also be providing a free shuttle service for parking from our very generous friends at Ecklers, which is directly next door, so no worries about limited parking folks! Expect a plethora of amazing beers on draft, including several specialty sours, for the celebration including:

There will also be a very limited supply of small-format (330mL) bottles from Cantillon and Brouwerij 3 Fonteinen. These will be available 2 per customer and on a first come, first serve basis.

We hope you will come out to Brix Project and join in on the festivities. Cheers to another great year!

August 2, 2017 By laura in Playalinda Brewing Company Comments Off on Dinner & Drinks, with a Side of History 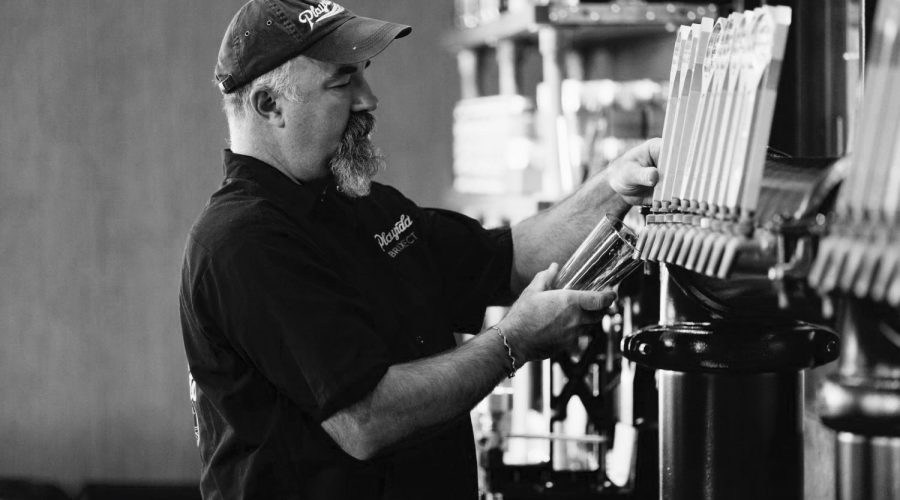 It’s not often you get a chance to indulge your inner craft beer geek, foodie and style hound all at the same time. On Monday, May 29, however, you’ll get to do just that at Playalinda Brewing Company’s inaugural Brix Project Beer Dinner.

For the first time since opening, the brewery will close its doors to the public to make way for this exclusive, gastronomic gathering. The evening will feature a four-course meal, developed under the creative culinary direction of Brix Project Executive Chef, Justin Medina. At the heart of the experience will be Playalinda’s craft beer, hand-picked to pair perfectly with the flavor profiles of each new course, and served up by Playalinda’s Brewmaster himself, Ron Raike.

Only 47 tickets have been issued, making the up close and personal behind the scenes access to the brewery part of the appeal of the evening. Both Raike and Medina will be on hand throughout the evening to discuss the food and beer pairing, along with an open-format for questions, behind-the-scenes access, tasting and more.

The menu will consist of a Tuna Tartare appetizer, followed by a second course featuring Lamb Lollipop. The entrée, Blue Cheese Crusted Filet, will be followed by a rich and decadent dessert course. Beer pairings and other beverage offerings are still under wraps, but will be shared through the events Facebook page as the menu continues to develop.

Tickets for this exclusive event include both tax and gratuity, and cost $75 per person. Tickets are available now, and can be purchased here.

Background – Playalinda Brewing Company – Brix Project opened its 16,000 square foot distribution brewery and brewpub in September 2016, and has become a fast fixture for both locals and visitors alike. The brewery, housed in a stylishly renovated former lumberyard, is the Titusville-based Playalinda Brewing Company’s second Brevard County location. Under the experienced direction of Brewmaster and Certified Cicerone Ron Raike, Playalinda has developed a strong following, and is known throughout Central Florida for brewing well-balanced, highly drinkable craft beer. Playalinda joined forces with Cavalier Distributing in November 2016 to launch distribution across central, east and northeast Florida.

April 24, 2017 By laura in Playalinda Brewing Company Comments Off on Going Green: Doing Our Part Playalinda Brewing Company is committed to keeping our carbon footprint low through reducing waste, re-using and recycling whenever possible.

Here’s how we are doing our part …

Did you know both Titusville brewery locations were recently added to Keep Brevard Beautiful’s list of  “Litter Quitter” local partners?

Businesses highlighted on this list have demonstrated consistently that they go above and beyond to reduce waste and limit use of plastics wherever possible.  Playalinda proudly partners with Keep Brevard Beautiful throughout the year on several of their eco-focused initiatives.

Because, you know, earth is a great place to live. Even better when enjoyed with good beer.

April 25, 2017 By laura in Playalinda Brewing Company Comments Off on 15 Years & Going Strong: The Wednesday Guys For the last 15 years or so, if you went looking for the crew from the local Florida Power and Light plant on a Wednesday afternoon – chances are, you’d have found them together. These days, you’ll find them holding down the fort at one of the community tables inside Playalinda Brewing Company – Brix Project.

What started as a trio of colleagues coming together to unwind mid-week after work, eventually grew into a cohort of coworkers and a full-blown Wednesday afternoon tradition.

Since 2002, the gang met once a week to share a few rounds of post-work beers. After clocking out of the Florida Power and Light station where they were all employed together, the guys would head to a local watering hole for some camaraderie, conversation and a couple of cold brewskis.

Between them, Fred Stone, John Malphurs, Brian McKeown, Dan Bayler, Ed Karczewski, Danny Quinton and Bill Jones collectively have over 217 years of experience with the Florida-based utilities company. The squad, now in their 60’s and 70’s, has long since hung up their hard hats at FPL.

“We started out sharing beers and talking shop up the road at Shamrock,” said Stone, who spent 22 years with FPL as a maintenance superintendent.

“These days, we talk about our doctors appointments, our grand kids, and who’s got the best cholesterol!”

Rewind the clock 15 years, and you’d have found Playalinda’s own Heather Hearon shooting the bull and serving up the beers with the Wednesday Guys Crew at Shamrock & Thistle Pub in Titusville. Hearon, now the general manager at Playalinda Brewing Company, was an instant hit with the guys.

“Eventually, as soon as we’d walk in the door, she’d know what to start pouring us,” said Karczewski with a smile, as he sipped his beer.

“I started really looking forward to seeing them each week,” said Hearon.

Apparently, the feeling was mutual.

When Heather announced she had accepted a job with Playalinda, the crew decided to follow her to the brewery without skipping a beat. Just like that, the Wednesday reunion tour had moved to the Hardware Store. Once Playalinda’s second location, Brix Project, opened in September 2016, the crew followed Hearon and relocated again.

Awhile back, the Wednesday Guys came up with a way to work their wives into the weekly rotation. The first Wednesday of the month, the ladies choose the destination, and come along for the afternoon adventure. After facing a few indecisive first Wednesdays, the Guys created a flow chart to help with the decision process. Obviously, you can take the left-brainer out of the process-driven environment, but you can never take the process-driven environment out of the left-brainer.

Over the course of a decade and a half, a lot has changed for the Wednesday Guys. The venue has shifted. The conversation has evolved. Hair has gotten whiter, and the beers have gotten better. However, this crew coming together to spend time with friends at their favorite local, place … that part hasn’t changed a bit.

Cheers to the Wednesday Guys, and their dedication, loyalty & friendship Playalinda Brewing Company is honored to have been one of the featured breweries in attendance at Cigar City’s 2017 Hunahpu’s Day!

The event, which is known nationwide as one of the most anticipated craft-centric beer festivals in America, has experienced tremendous growth since its’ inception in 2010.

This year, Playalinda Brewmaster Ron Raike assembled a quartet of his best craft beer creations for the event, including

The team at Gourmet Everyday named Playalinda’s Key Lime Slice as one of the nine Best Beer Finds of the event. Read the full story here: https://gourmeteveryday.net/2017/03/13/best-beer-finds-at-hunahpus-day-2017/

April 24, 2017 By laura in Playalinda Brewing Company Comments Off on December Brewsletter Cheers to the most festive time of the year!

As 2016 draws to a close, it’s only natural to pause for a bit of seasonal reflection. It’s been one heck of a year for the Playalinda Brewing Company team, and there’s no way we’d be where we are today without YOU. In 2016, we opened our new brewpub, Playalinda Brewing Company – Brix Project, joined forces with Cavalier Distributing and launched distribution across central, east and northeast Florida, and expanded our team by double- just to name a few milestone accomplishments.

The support of the Titusville, Space Coast, Brevard brewing and greater craft beer community this year has been absolutely awe-inspiring. Thank you will never seem big enough to really encapsulate how grateful we all are for your relentless encouragement and patronage. As we look forward to 2017, there are many exciting projects and announcements on the horizon.

New Merchandise & Gift Ideas: An all- new stash of Playalinda merchandise has arrived, giving you more options than ever to rep your favorite Brevard brewery in style. Warm and fuzzy zip-front hoodies, raglan and long-sleeve logo t-shirts, brewers shirts and glassware are among the new arrivals. This kind of local swag is perfect for the craft beer lover on your gift list. Or, an always-awesome option is one of our PBC gift cards. These are transferrable and can be used at either location for food, beer, bottles or merchandise. Added bonus- you know they’ll fit!

In the days and weeks ahead, our hours will be adjusted for the holidays. Here are the need-to- know changes.

Something is wrong. Response takes too long or there is JS error. Press Ctrl+Shift+J or Cmd+Shift+J on a Mac.